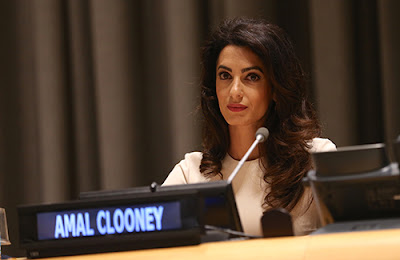 Amal Alamuddin is being slammed for being a diva with an obnoxious attitude. Amal, whose claim to fame is marrying Hollywood actor George Clooney, allegedly threw a tantrum while meeting with Iraq’s UN ambassador Ali Alhakim this week.


According to the New York Post, the international human rights lawyer showed her true colors when she apparently lectured the Iraqi ambassador with an unauthorized camera crew at the Iraqi UN Mission of Iraq in New York City. What’s more, she demanded to meet with the prime minister at the meeting and supposedly used a ‘dismissive, lecturing tone’ with Ali Alhakim while trying to prove how she thinks ISIS fighters should be captured and brought to justice in the courtroom.

Observers say that Ali Akhakim grew so frustrated with Amal’s diva attitude that, at one point, he even turned around and told her, “This is highly insulting. This is very unacceptable” while Amal apparently appeared “tone deaf” and “completely uninterested” in what he had to say about how ISIS should indeed be targeted.

Amal and her camera crew further requested for an interview with the ambassador which was denied before she was escorted out of the building for her ‘obnoxious’ behavior.