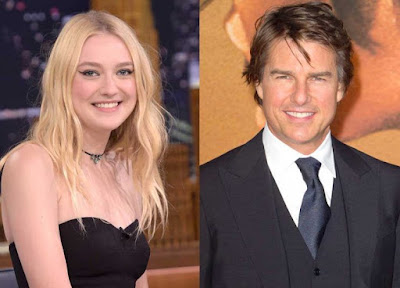 Working with Tom Cruise is the gift that keeps on giving — well, it was for Dakota Fanning.

The American Pastoral actress co-starred with the movie megastar in 2005’s War of the Worlds when she was a pre-teen. The bond between the pair, who played father and daughter, remains today, Fanning said on Watch What Happens Live this week.

But he doesn’t. So what does Cruise, 54, buy a 20-something actress who loves fashion? Footwear!

Dakota was in seventh grade when the sci-fi movie came out. At the press junket, she talked about meeting Cruise for the first time on the set.

“When I first met Tom … he came out of the scene where the aliens come out of the ground [and] grabbed me by the shoulders and he said, ‘WE’RE MAKING WAR OF THE WORLDS, BABY!’ He started shaking me real hard,” she recalled. “Then I realized I was actually going to be in the movie, I couldn’t believe it.”

Mini Dakota continued, “When I met him, I realized that when you see him on TV in interviews and things, he’s the same person I know in real life. He makes you feel comfortable and enjoys life and had a great time every day.”