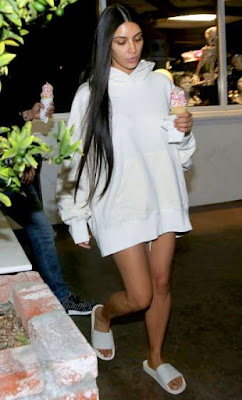 Reality television star, Kim Kardashian has made her first public appearance since a robbery incident in France.


Kardashian was pictured grabbing an ice-cream with her BFF, Jonathan Cheban, who trailed behind her during an outing.

She looked amazing as usual wearing a long white hoodie and a matching sandal, but reports says she has not gotten over the Paris robbery incident.

Speaking concerning the incident, a source close to the TV star told Us Magazine that Kardashian is yet to adjust to reality.

“She’s not doing well,”
“[She’s been having] difficulty sleeping and has anxiety when she leaves the house. She’s never experienced anything like this before. This shattered her world.”
at 2:24 PM