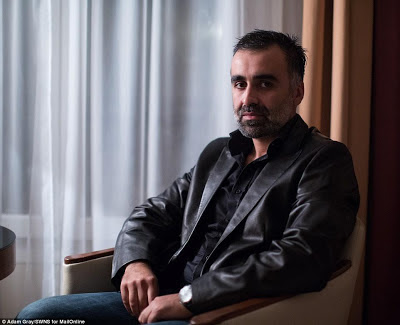 The traumatised Algerian father-of-one, who has asked to be identified by his first name; Abdulrahman, for safety purpose, revealed that he pleaded with the robbers not to harm Kim, but admitted that he let them in to her luxury Parisian hotel apartment

‘I went up to the apartment with the robbers. I was tied up in the first minutes, with handcuffs. I was in the room of Kim Kardashian. One was attacking her; the second one was with me. I saw Kim being pulled out of bed.'

The PhD student, who works part-time as a security guard to fund his studies, revealed how he desperately tried to throw the robbers off the scent by claiming not to know who Kim was, then was marched to her door ‘by the scruff of his neck’ and forced to open it with a spare key from the front desk.

He watched in horror as the star said she only had a small amount in cash to give them.

Abdulrahman revealed that the robbers were French speakers in their 40s or 50s, and were very angry when Kim told them she only had a small amount of cash in the room to give to them.

‘I told him, I ask you, don’t hurt her. I repeated it. He told me, don’t worry, we are here for money. I repeated another time, please don’t hurt her. He told me: Keep calm and all will be OK. Don’t move or make a sound. One of the gang kept telling her to shut up. I put my hand on her shoulder and told her to be calm. I said, you have to be silent, you know. She sat down on the bed. She asked me, are we going to die? I said, I don’t know, how can I know? She said, I have family and babies. I told her, me too, I have one son. And she began to scream again. That’s why he put the tape on her mouth; a long piece of tape, all the way round her head,” Abdulrahman said.

Abdulrahman noted that he let the gunmen into the building because they were dressed 'perfectly' in police uniforms, but as soon as the robbers got inside; they forced him to the floor and handcuffed him.

‘At first I looked at them and one got very angry, 'He told me to put my head down and never look at him again. He repeated, never, never look at me, or I will kill you.' he said. Abdulrahman now badly shaken from the Paris incident, is returning to Algeria to his wife and four years old son, to repair himself psychologically.
at 11:47 AM