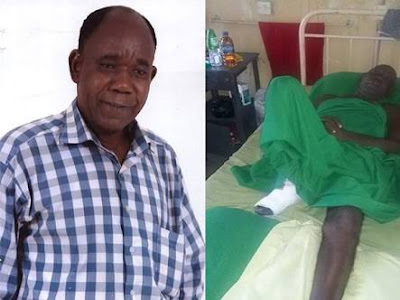 Weeks after soliciting for financial assistance to prevent his right leg from being amputated, Veteran Nollywood actor, Tunde Alabi has had that same leg amputated.

The actor, had been battling with diabetes which affected the leg and doctors advised that the leg should be cut off so that it won’t affect other parts of his body.

The operation, according to YMG, was done at a hospital in Surulere area of Lagos on Thursday, 20th October 2016.

Weeks back, when journalists visited the ailing actor who was one of the regular characters in the now rested TV series, the ‘Village Headmaster’ he was reported to be critically ill at the Lagos General hospital and needing financial assistance.

When he was narrating his ordeal, Mr Alabi said he was hale and hearty until the night of 19th of July, when he had a strange expulsion on his right leg which has not only kept the actor off the screen for sometime now, but also has impoverished him.

“I went to bed at about 8. 30 pm that fateful day with the intention of waking up at 1 am. When it was about 9 pm, I had a strange expulsion on my right leg. Immediately, the leg started burning and I screamed throughout the night. The following morning I couldn’t move the leg again. It was a spiritual attack. That’s what has kept me under this condition,” he narrated.
at 12:17 PM