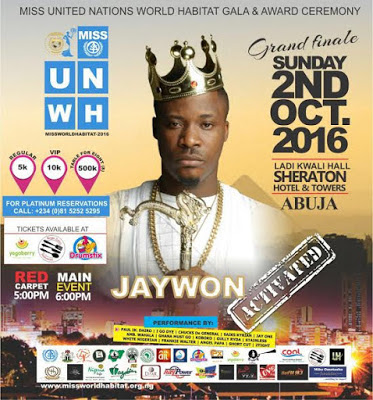 The recent Miss United Nation World Habitat Pageant held in Sheraton Hotels and Towers has come and gone but the controversy still lingers as it was disclosed that Nigeria's famous indigenous artist and award winning singer was used massively for publicity without payment plans concluded.


Jaywon who recently released a mind-blowing album confirmed he was contacted but no conclusion was reached and his pictures were used on all publicity materials both on radio and television.

His teeming large fan base in Abuja besieged the venue with high hopes of seeing their favourite artist perform only to get the shock of their lives as he was not even in Abuja for the show while he was been mentioned to perform.

On their websites and instagram pages https://www.instagram.com/p/BKQsbENjwwr/‎ his image is still there. With the belief he was paid and did not show up, the Kogi State born and Headies award winner authoritatively confirmed that he was never paid. Several other stars were used for the publicity hype who did not show up including reportedly veteran Nollywood star Ramsey Nouah.
at 1:45 PM