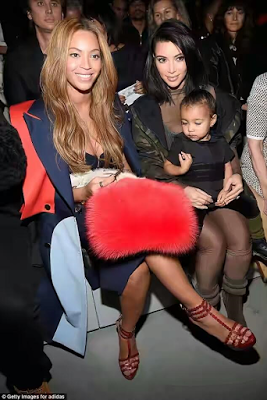 Kanye West appears to have opened a can of worms with his outburst at Jay Z over Kim's robbery ordeal.


Shortly after he lashed out, a source said Jay Z can't stand Kanye and only tolerates him. 'Jay can’t stand him,' said the source. 'He looks at him as this crazy, eccentric motherf***ker he can tolerate in small doses. Kanye is a nut job. Everyone knows that.'

Now a source close to the Kardashian clan has reinforced that view saying Beyonce only tolerates Kim because of the relationship between their husbands.

'She’s mostly tolerated her because of their husbands’ friendship and [their] mutual friends, like Jennifer Lopez,' the insider claimed.

'She is always a little icy to Kim. The last time they hung out, the minute Beyoncé could leave the conversation, she did. They always have lots of awkward pauses.' The source claims the proof can be found as far back as Kim and Kanye's wedding in 2014 - to which Bey and Jay were invited but didn't turn up.

'Beyoncé’s behavior during the wedding proved she isn’t Kim’s biggest fan,' they said. Mr and Mrs Carter apparently liked 'the old Kanye' before Kim, and that they give him stick whenever he appears on Keeping Up With The Kardashians. 'She always gives Kanye a lot of grief whenever he’s done anything for the show,' the source said.