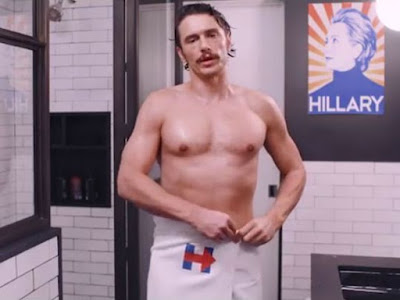 James Franco has released a stripped down endorsement for Hillary Clinton. Sort of.

The 38-year-old actor took to Instagram on Tuesday to post his second endorsement video for the Democratic presidential nominee just a week before the general election.

“I don’t usually endorse candidates, but when I do they’re extraordinary #MostInterestingWoman,” he wrote.

Franco once again spoofs the famous Dos Equis “Most Interesting Man in the World” ads and gives yet more reasons why he thinks Clinton is “the most interesting woman in the world,” posing in just a towel.

“She didn’t just bring Iran to the table, she whittled the table with a single piece of oak,” he says in the video. “Her laugh is in the Smithsonian. Yoda was her apprentice.”

“She’s the most interesting woman in the world,” he continues, adding “I don’t always endorse candidates, but when I do, they’re extraordinary. Vote wisely, my friends.”

I don't usually endorse candidates, but when I do they're extraordinary #MostInterestingWoman
A video posted by James Franco (@jamesfrancotv) on Nov 1, 2016 at 4:58pm PDT

Franco teamed up with EMILY’s List, Priorities USA and Schlep Labs to launch

He added: “Hillary Clinton has led an amazing life; it is not a stretch to describe her as ‘the most interesting woman in the world.’ I wanted more people, particularly younger people, to get to know an extraordinary woman who has, through a lifetime a work, earned our trust and support.”

Below is his first endorsement video

I don't usually endorse candidates, but when I do they're extraordinary #MostInterestingWoman
A video posted by James Franco (@jamesfrancotv) on Oct 26, 2016 at 8:16am PDT