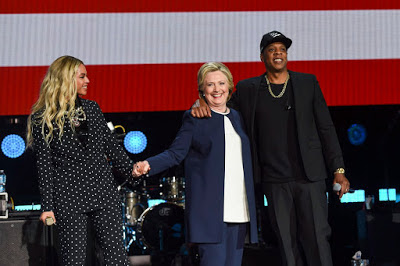 On Friday, Beyoncé performed at a rally in Cleveland for Democratic presidential nominee Hillary Clinton, urging the audience to vote to “create more change.”


After performing “Formation,” Beyoncé took a minute to speak about Clinton’s historic candidacy, referencing a time when “if you were a woman, it did not matter.”

Speaking to the crowd, Beyonce - whose dancers all wore 'I'm with her' T-shirts - said:
“I want my daughter to grow up seeing a woman lead our country.

"Less than 100 years ago women did not have the right to vote. Look how far we've come from having no voice to being on the brink of making history - again - by electing the first woman president. But we have to vote.

"The world looks to us as a progressive country that leads change. Eight years ago I was so inspired to know that my nephew, a young black child, could grow up knowing his dreams could be realised by witnessing a black president in office.

"And now we have the opportunity to create more change. I want my daughter to grow up seeing a woman lead our country and know that her possibilities are limitless.

"We have to think about the future of our daughters, our sons, and vote for someone who cares for them as much as we do. And that is why I'm with her.
at 9:39 AM