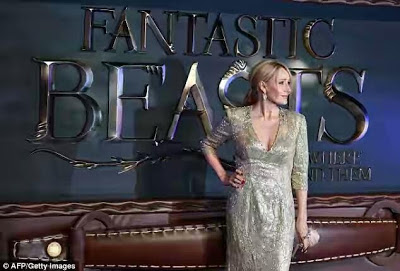 The super successful author whose Harry Potter franchise forms the core of her fortune dropped off the money pile four years ago but recent assessment of her earnings suggests she is a dollar billionaire once more due to the unstoppable march of Harry Potter.


The new film inspired by the Potter world, entitled Fantastic Beasts and Where to Find Them; the author’s involvement with theme parks; and a series of stage productions have all contributed to her resurgence, the New York Times suggested.

The newspaper said that while its calculations are only smart guesswork, Rowling’s total earnings come in at $1.2 billion.

The paper said the core of Rowling’s wealth remains the seven Harry Potter books, which have sold an estimated 450 million copies, with estimated total revenue of £6.1 billion with her share amounting to £900 million at a standard 15 percent author’s royalty.

The author earned as much as £80million from just her Harry Potter theme parks.
at 11:55 AM