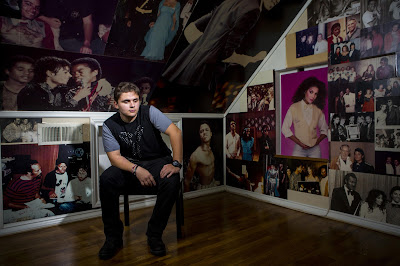 When your father’s name is Michael Jackson, people have expectations and thus is the case for Prince Michael, his eldest son.


Even now after his father died in 2009 when he was 12-year-old, many people have certain expectations about the Jacksons and their future and Prince Michael Jackson does not seem at all concerned about any of them. At 19, the young man is prepared to set his own course, one that honors his father but does not imitate him.

“Everyone thinks I’m going to do music and dance,” he says, laughing wryly because, as he is the first to admit, he cannot do either.

Jackson is interested in producing entertainment but from behind the scenes. Earlier this year he produced his first music video, for Omer “O-Bee” Bhatti’s “Automatic,” and used it to launch King’s Son Productions, the name a wink toward his father’s 1980s coronation as the “King of Pop.” Another video, for the Sco Triplets, soon followed.

Watch the Video for Automatic by Omer Bhatti


"Music is a big part of my life,” Jackson says. “It shaped who I am because of my family, but I’ve always wanted to go into production. My dad would ask me what I wanted to do and my answer was always producing and directing.”

Despite pursuing a career in entertainment, he prefers to keep a low profile. He stays away from gossip blogs and keeps social media at arm’s length, though he’s “getting out there more now with the company.”

“It sounds bad, but … a lot of people are motivated by themselves,” Jackson says. “He said don’t trust someone just because it sounds like a good idea — do your research. There are a lot of people who want to interact with [me and my siblings] just because of who we are.”

Prince Michael knows his life has been, in his words, “unconventional,” but he seems at peace with most of it, including the fact that Jackson’s biological mother, Debbie Rowe, terminated her parental rights in 2001.

“I’m very lucky to have two mother figures in my life, my grandmother and my cousin Frances. As for my birth mother, she’s always been more of a friend, and that works for us,” he says. “You could say my whole life has been unconventional. I really love that though, and it’s all I’ve ever known.”

Growing up he remembers his father proudly showing him “Thriller” and “Moonwalker” — two of Michael’s most visionary approaches to long-form music videos— and the two would also spend lazy afternoons binge-watching films and dissecting them. The “James Bond” series and horror were among shared favourites, and they would watch epics like “King Kong” and the “Lord of the Rings” trilogy with the sound turned off and Michael would point out different shots.

Watching his dad in action, filming videos intended for Michael’s “This Is It” London residency (the superstar was rehearsing for those shows when he died at age 50), cemented Prince Michael Jackson’s career goal.

“That’s when I knew it was what I wanted to do,” He recalled. “I loved the thrill of it. I was able to talk to so many people on set — those doing the lighting or the assistant cameramen. I learned so much.”

Read more of the interview here