Nigerian developer comes for Linda Ikeji, claims she stole her social network idea from him 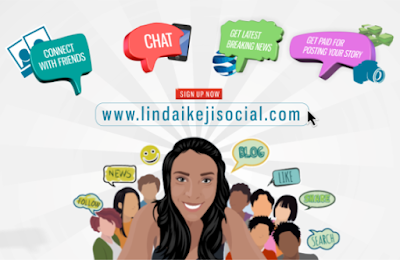 Yesterday Nigeria's biggest blogger Linda Ikeji shocked Nigerians when she launched her social media site "Linda Ikeji Social". A Nigerian by the name Adedeji Jaiyesimi has however come out to claim that Linda stole the idea from him.

In an email sent to us by Adedeji he mentioned that the whole idea was first conceived by him but stolen by Linda Ikeji and her developers.

I hope you find some sense in this post and my cry out. Please read and share, this is not to tarnish any damn image but the truth, she might try to ignore this but in the future people would know the truth. Please read below.

"All my life I have never thought that I'd feel this way towards a fellow woman, I mean I love women that are go getters but some how someone sent me a link to watch a video of what she launched yesterday.

She claimed to have a new site called LIS and she's the first to do it, I paused all I was doing to watch this video... I was in silence for a while and I thought about what to do.

She stole her LIS idea from my site www.vivalasgidi.com, I had been working on the site for months and currently it's in a beta version because that's what you do when you set up a social media site with so many capabilities and still open to better developments.

How can she say she's the first to do that, ahn ahn Aunty you no dey fear God. I'm a developer and I know a lot of things, people who monitor the security of websites can tell where traffic come from and go back to later, I have seen very many times a user come from her blog and goes back to Google. I even found it interesting but I never suspected this.

Three days ago I noticed my own website started to misbehave and I started working on it again only to find out that my hosting partner was trying to fix the same issue as well and so I became paranoid on Tuesday thinking could sister Linda be the type to drag her competitions into the ground?

While my site has been in the beta version I have been going from meetings to meetings to seek a sponsor but so many Nigerians are still trying to grasp the social media business and then this woman would do this. Some would rather copy than try something new and groundbreaking.

The funny thing there's that vivalasgidi.com has so much more to offer in the future but I want you all to know where she stole the idea from and if she tried to steal another when we launch new things you'd remember I said this.

Ask her why she did not kick start her media ish like she bragged sometime ago, how come all of a sudden  her LIS had to come first, why is she trying to buy people's loyalties as she advertised giving out so much money like she was telling me to try to beat her on that, why was everything all about incentives, I bet she can't explain all the site is about except what she's been fed from the thief developers too, awon ole.

I can breakdown my website to bits and tell you everything about it, we have some few members there already giving it a trial and giving us feedbacks so tell the liar to stop claiming to be some brilliant person with a groundbreaking idea, now I really don't like her anymore and it's sad. I thought she was smart but now I know she ain't, she waited like 10 years to release a social media site with all her money? I built a site using my two lovely hands with the small money I saved in weeks and I could have spent more if I didn't know how to build my site at all.

Nigeria would keep choking the brilliant and creative entrepreneurs if people don't learn to be willing to learn from them but instead to steal from them. I was so fuckin pissed off watching her stupid pancaked face talking about what she rarely knew about.

People should just know she stole the idea from me and the investors I spoke with in the past, I hope you guys can see what I was talking about now, can you grasp the business idea I tried to sell to you."

It's deeply saddening, I hope people learn to speak out on things like this everytiome, if there's no system to protect you you can have dated on a platform for a start. Smh!
at 4:15 PM