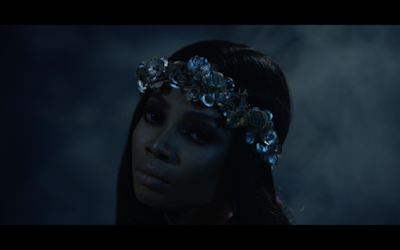 Frank. Fearless. Formidable…Just a few words that spring to mind as we watch Toke Makinwa in her newly released ‘On Becoming’ visuals.

In this video, Toke lets her fans into her world in a whole new way. Fans have counted down to this visual release which was heralded by a 7-day countdown on social media with the hashtag #IAMBECOMING #AJOURNEYTOBECOMING

The big reveal coincides with Toke’s birthday today and sparks conversation about what she is ‘Becoming’?

Directed by Kemi Adetiba, On Becoming is a graceful yet haunting 3-minute clip shot in a pitch-black room. Suddenly we hear the strike of a match which reveals a hand lighting a candle. The Candle is lifted to illuminate a wall plastered with salacious newspaper headlines. Toke is then seen standing and brushing her hair in stoic fashion, without emotion on her face.

This new material showcases a mysterious side of the media personality as it expresses unspoken emotions and brings to light a side of Toke Makinwa that we are yet to experience.