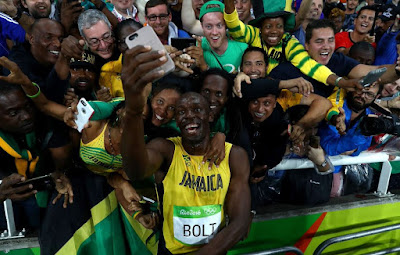 The fastest man in the world, Usain Bolt, has said he is looking forward to switching lanes and playing for Manchester United.


Bolt was speaking at the world premiere of the movie “I Am Bolt”, which chronicles his amazing rise to the top in athletics.

The Jamaican sprinter, whose dream is to play for the Red Devils, also said he was looking forward to Jose Mourinho “giving me a call”.

Bolt, who has won nine Olympic gold medals, was in good spirits on the red carpet of the event at the Leicester Square Odeon in Central London.

When asked if he had been approached by the United boss, Bolt joked: “Hopefully, not yet. Hopefully he’ll call me and see what’s going on. I’m really excited about that.”

Borussia Dortmund CEO, Hans-Joachim Watzke, has already confirmed that Bolt will train with the Bundesliga club .

Speaking about his plans to retire from the track at next year’s World Championships in London next year, Bolt said: “It’s big. London is a place where I get a lot of love. It’s the right place for me to retire.”
at 12:55 PM