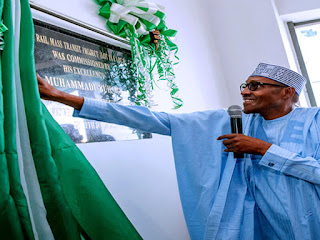 On Thursday the 12th of July, 2018, President Muhammadu Buhari commissioned the Lot 1A and Lot 3 of the Abuja Rail Mass Transit with a promise of support from the federal government for the negotiations towards the completion of the second phase of the Light Rail system.

The 1435mm standard gauge project is the first of its kind in West Africa, and it covers a total length of 45.3 km.

President Buhari commissioned the project constructed at the revised fee of $824m at the Abuja Metro Station.

Accompanied by some members of his cabinet and the Chinese Ambassador to Nigeria, Dr. Zhou Pingjian, Buhari later embarked on a tour of the Idu Control and Operation Centre and the International Airport Train Terminal.

He described transportation as the live wire of any city and stressed that he is optimistic that a modern rail service would be a boost to the FCT economy and an enhancement to its social life.

Buhari urged the management of the rail services to ensure efficient operations, punctuality, good customer service and maintenance culture in the operations of the rail.

He stated that the light rail is evidence that the government is one that delivers on its promises.

The FCT Minister, Muhammad Musa Bello, said the Rail Mass Transit System was made up of 6 Lots and would be linked with the National Rail Network when eventually completed.

He stated that the Federal Executive Council (FEC) had approved for construction by China Civil Engineering Construction Corporation (CCECC) the construction of phase II of the rail project, and it’s expected to cover a distance of 32.54km from Nnamdi Azikiwe Expressway at Garki Area l via the transportation Centre to Gwagwa and from Bazango Station to Kubwa at the cost of $1.3billion which would be funded by China Exim Bank.