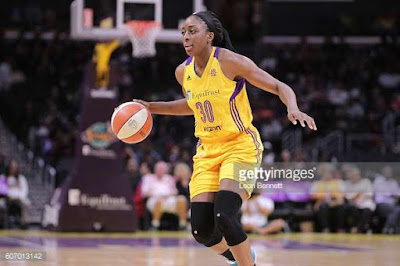 Nigerian basketball player Nneka Ogwumike has been named the Most Valuable Player of the Women’s National Basketball Association (WNBA).

On Tuesday, September 27, the 26-year-old received 31 of 39 first votes to win the WNBA Most Valuable Player.

Ogwumike shot a league-best 66.5% as the Sparks went 26-8 this season and earned the No. 2 seed in the NBA playoffs.

She set league records for consecutive field goals made (23) and most field goals in a game without a miss (12, against the Dallas Wings on June 11).

Ogwumike says she has always dreamt of being named the Most Valuable Player of the WNBA.

“As far as goals go, this honour has always been on a list I wrote down in the back of some journal years ago,” Ogwumike said.

“Typically, when you have achievements in mind, you prepare yourself and set standards to take a step-by-step approach to reach the top. Looking back, however, my 2016 season didn't feel quite like that.

“Many may not understand when I say that this just kind of happened.....things fell into place. Please, don't let me leave you misunderstood! Dreams don't sprout overnight and triumph doesn't grow from trees.”
at 4:43 PM