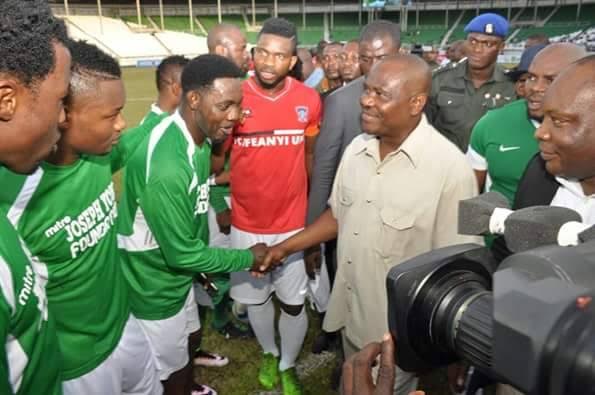 The ‘A Trip To Jamaica’ Novelty match which is billed to take place tomorrow Saturday, September 24, at the Teslim Balogun Stadium, will feature prominent EX Super Eagles players  such as the legendary Kanu Nwankwo, Jay Jay Okocha, Peter Rufai, Joseph Yobo, Mutiu Adepoju, Victor Ikpeba and Henry Nwonsu, who will be playing against Jamaican Ex Internationals like Deon Burton John, Lawrence James Hubert, and Kevin Lisbie who will be arriving the country today.


Jay Jay Okocha of the Ex Super Eagles of Nigeria has made a public declaration on @aycomedian instagram page on how he will be dribbling people’s fathers at the A Trip to Jamaica Novelty match against the Jamaican side. The idea for the game, which was conceptualised by Comedian AY, the Guinness World Record holder and producer of the highly anticipated movie ‘A Trip To Jamaica’, is to celebrate the cultures of both countries, and also to herald the release of the movie that will be in all Cinemas across Nigeria from September 30.

The Match, which would enjoy a live broadcast on Hip TV by 3pm, has been made free for all to attend by AY. The football game will be witnessing live comedy and musical performances by Gordons, Akpororo, Funnybone, Ushbebe, Sexy Steel, Solidstar and Tekno.
at 11:10 AM