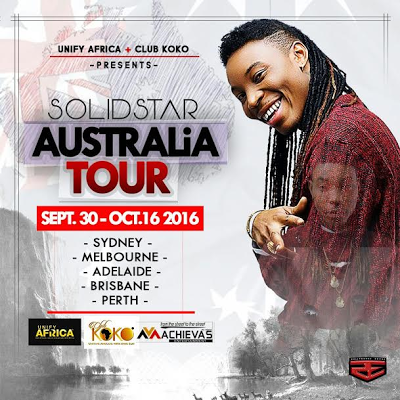 Achievas Entertainment signee; Solidstar has announced plans and destinations for his upcoming Australian tour set to hold on the 30th of September to October 16, 2016.

The announcement which came as a post on his Instagram page read; “Australia, we are coming and I’m super excited!” accompanied with a graphic design containing one of his newly released photos.

The ‘Wait Refix’ afro-pop sensation also announced his highly anticipated album ‘WEED’ is in its finishing stages – confidently boasting the album will be one of the best albums ever made in the history of the Nigerian entertainment industry.

The album which the title represents the phrase “Witness Everything Exceptionally Different’ is rumoured to be due for release sometime in October, 2016.
at 11:43 AM