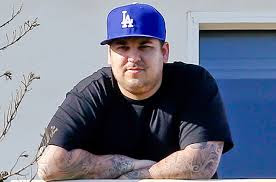 Rob and Blac Chyna have split, and he's been living at his own home for nearly 2 months, almost never walking out his front door.


According to a report by TMZ, Rob Kardashian has given up on life again, broken up with pregnant girlfriend, Blac Chyna, added more weight and is now a recluse again. Read the report below...

"Rob Kardashian has given up on life again, retreating to the confines of his home and gaining all his weight back...so claim members of his family who are worried his life is now in danger. Our
Kardashian sources say.

Rob and Blac Chyna have split, and he's been living at his own home for nearly 2 months, almost never walking out his front door.

We're told Rob has gained back the 50 pounds he lost shortly after hooking up with Chyna ... again hovering around 300 lbs. Our sources say it's become a vicious cycle. Rob has lost his motivation because of the weight gain, which has renewed fears his diabetes will spin out of control.

You'll recall he was hospitalized months ago after a diabetes scare. Rob is also MIA for his own show. Chyna -- who's 8 months pregnant -- showed up for an appearance to promote "Rob & Chyna" and he was a no-show. He didn't even stop by the baby shower that was thrown specifically for him a few days ago. One big problem ... Chyna is the one who pulled Rob out of his depression, but now the relationship has become the big problem -- they fight whenever they're together and it just deepens the problems.

As one source put it, "Rob is slipping back into a dark place." We're told the family is praying he "snaps out of it," and they want to do whatever they can to help him.
at 10:01 AM