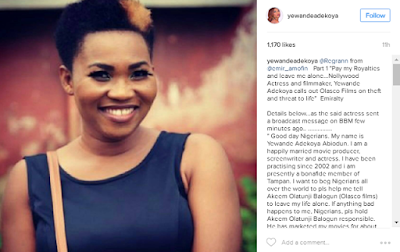 
In a message she broadcasted on her BBM which was published online by her publicist, Emiralty Bello and regranned by her, Yewande alleged that the movie marketer is owing her N2million as royalties for her films which he has helped market. She says he is after her life and that if anything happens to her, he should be held responsible.

" Good day Nigerians. My name is Yewande Adekoya-Abiodun. I am a happily married movie producer, screenwriter and actress. I have been practising since 2002 and i am presently a bonafide member of Tampan. I want to beg Nigerians all over the world to pls help me tell Akeem Olatunji Balogun (Olasco films) to leave my life alone. If anything bad happens to me, Nigerians, pls hold Akeem Olatunji Balogun responsible. He has marketed my movies for about six years now and i have nothing to show for it financially. I do not even have a car of my own. He sold igbodudu 1&2, omo elemosho1&2, kudi klepto1&2, Emere, Irawo meji and Kurukuru1,2,3. This man is presently owing me the sum of 2million naira and he has refused to pay because he feels no one can challenge him. He has been owing me since 2014. When he owes you, you dare not ask for your money, if you do, he will start war just like the one he has just started. He is also not the type that signs a contract due to his dubious character. He prefers verbal agreements. He is very influencial in the yoruba movie market, so it is almost a waste of time to report him to anyone there. I know this because i had earlier reported him to several marketers who have rapor with him, still no result. I called the president of the yoruba marketers association, he didn't pick my calls. I was eventually able to speak with his assistant who sympatised with me and then told me that little or nothing could be done about the matter. Olasco has humiliated and oppressed me for too long, and now, i feel it's time to speak up.

The last business deal i had with him that really pissed me off was Kurukuru, a three part movie i wrote and produced while i was 8months pregnant in 2015. He released kurukuru online and on DVD in nov 2015, and then claimed we didn't make any profit from the 3 releases of the movie despite the huge success record the movie had. I decided to keep mute about everything since last year, because i do not like to fight anyone or make noise over anything whatsoever. He sent me an embarrassing sum of N300, 000 which he believes should serve as my payment for Emere, Irawo meji and Kurukuru part1,2 and 3. I quietly moved on with my life and faced my work squarely, but Mr Akeem Balogun will not let me be. He keeps oppressing and terrorising anyone i choose to do business with. He even went as far as influencing movie marketers and some movie producers to stop casting me for movie roles. Why? What exactly did i do to you? What exactly do you want from me? Mr Akeem Olatunji Balogun please leave me alone, i refuse to be enslaved by you, like you enslave some others. You don't pay them and you also won't let them do business with other people. Maybe it's because i refused to date you even after all these years, that is why you are strongly determined to destroy me. I serve a living God Mr Akeem and the God i serve will never allow darkness overcome light. Olasco films has refused to pay me my royalty for the three movies: Emere, Irawo meji and Kurukuru part1, 2, 3 and i have not yet taken him to court for that, and he is here, strongly advocating against me doing business with other marketers and film distributors of my choice. I know you are tough but my God is tougher than you. Don't try HIM. I still have the bounced cheque of 1million naira that you gave me in 2011. May my God reward you accordingly. My beautiful fans and fellow Nigerians all over the world, pls help me tell this man to leave me alone oooooooooo if he does not want the wrath of God to deScend on his entire household.
at 3:10 PM