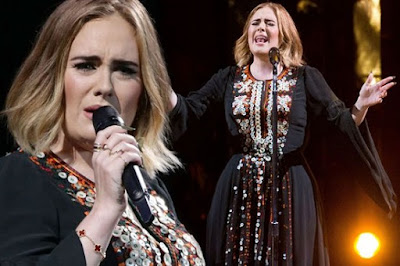 'Hello' singer,  Adele is earning around £84,000 (29 million naira) daily after the huge success of her last album.

The star made an incredible comeback to the music industry with her album 25 last year, with it becoming the fastest selling in UK history.

Now it's claimed she raked in around £30million last year through her company Melted Stone Limited, according to newly-released accounts equaling a huge £84,000 a day.

Her company Melted Stone Limited turned over £30.7million. It's claimed the company made a £15.9million net profit, as well as holding £13.7million in funds for the star.

Her other company, Melted Stone Publishing Ltd, is claimed to have held £5.2million, and together they had reported turnover of more than £103million in the last five years.
at 1:39 PM