Africa's first electric rail set to be launched in Ethopia 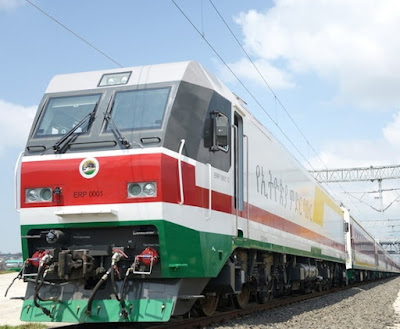 Ethiopia will on Wednesday launch Africa’s first modern electrified railway line which will link the Ethiopian capital, Addis Ababa with  the port of Djibouti.


The full length of the railway is 752.7 kilometers, with a designed speed of 120 km per hour.

With a total investment of $4 billion, it is was built by China Railway Group and the China Civil Engineering Construction Corporation (CCECC).

“The railway is constructed on the basis of Chinese railway technology standards while taking into account the national conditions of Ethiopia and Djibouti,” said Zeng Deli, a project manager of the China Railway Group, to Xinhua.

It was designed and constructed in a most economical way, taking only six years for its final completion, which should be viewed as some kind of miracle even in China, Zeng said.

The modern standard-gauge Addis Ababa-Djibouti railway runs parallel to a decrepit meter-gauge version built over 100 years ago by Europeans.

Over 90% of Ethiopia’s imports and exports, in particular energy and food, are made via the sea port of Djibouti.

The capacity of the current road system has long been overwhelmed.

When the new railway becomes operational, transport time from Djibouti to the Ethiopian capital will be reduced from 7 days to ten hours.

Besides faster transport, the Chinese firms have an even greater ambition. That is, the railway will serve as a catalyst for Ethiopia’s national economic development.

The Addis Ababa-Djibouti railway is only one of many major projects currently under way in the framework of China-Africa cooperation.

For the Chinese contractors, the construction of a railway with a designed speed of 120 km per hour is not difficult. But it takes nothing short of a great feat to complete it with no compromise on quality and timeliness when there are inadequate construction materials and technical staff in Ethiopia.

With careful planning and patient coordination, the Chinese firms managed to make sure construction materials imported from abroad arrived on time. To ensure good quality and no delay in construction, they even took the pains to manufacture the materials themselves, despite their higher cost.

For the Chinese firms, a lack of local technical personnel with adequate railway technology knowledge is a more serious problem.

For example, it took 20,000 workers to complete a specific section of the railway, and it would be impossible to have the posts filled all by Chinese, said Fu Xun, another project manager with the China Railway Group.

To tackle the challenge, the Chinese firms made the training of local technical workers a daily routine of their operations in Ethiopia. For the past few years, more than 15,000 local workers went through various training programs, thus ensuring enough manpower for railway construction and a talent reserve for future management of railway operations.

To protect its precious wildlife resources along the railway, the Ethiopian government set a high environmental protection protocol. To meet these high ecological standards, the Chinese companies did their best not to alter the original landscape along the railway.