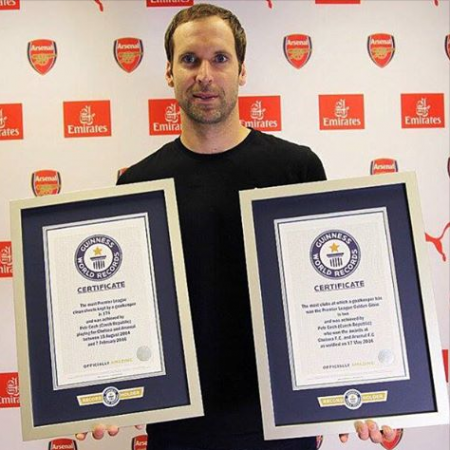 Arsenal star Petr Cech has been included in the Guinness Book of Records this year, for two landmarks he reached last season.

The 34-year-old became the ‘keeper with the most clean sheets ever in the Premier League, with 181, and also became the only player to ever win the golden glove with two separate clubs, the Gunners and Chelsea.

Ousted by Thibaut Courtois at the Blues, the former Czech Republic international has gone on to become a key player for Arsene Wenger.

Cech was included in the book alongside Everton midfielder Gareth Barry, as revealed by the Guinness Book of Records, who has become the player with the most Premier League starts ever, 580.

Barry is a vital player at Goodison Park, and has made those starts for Aston Villa and Manchester City as well as the Toffees.
at 3:25 PM