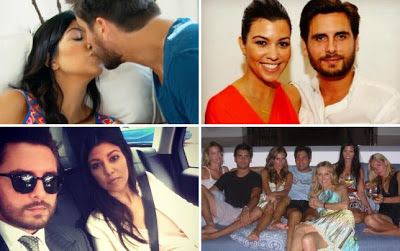 Kourtney Kardashian and her baby daddy Scott Disick have rekindled their turbulent romance over a year after they went their separate ways. The couple got back together after taking a family holiday in Miami in early September. Read the full report after the cut...

According to the source, "Kourtney said that her and Scott really reconnected on this trip," but things didn't just change between them. Not overnight.

"Disick has finally got his s--t together," the source told Radar, adding that "Kourtney thinks that Scott needed to be shut out of her life." Only then, the insider said, did "he realize how much she means to him," even beyond the point of missing the kids and being lonely.

"They did have a lot of sex on the trip and have been having sex for months," said the source, which has quite a lot of intimate knowledge. But even while rumors of Kourtney Kardashian and Scott Disick back together seemed like nothing but a pipe dream, all was not lost. For one, he was still always a hands on dad to their three kids, perhaps even more so than when he and Kourt were together all along. That did not go unnoticed.

"Kourtney thinks that this vacation was exactly what they needed to get them back on the right track," the Kardashian source claimed. "Oh, and she recently revealed that she would like more children and "the two are taking the necessary steps to make that happen."
at 11:36 AM