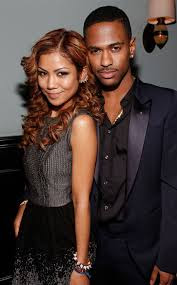 Singer Jhene Aiko left her husband for Big Sean and it seems they are now having issues if the story from MediaTakeOut is to be believed.

Word on the curb is that Jhene Aiko caught Big Sean cheating with a popular Latina insta-thottie. MediaTakeOut.com spoke with an insider close to Sean who told us, “Sean is not the kind of guy who you can stop from cheating – he loves women too much. Especially small Latina ones.”.

And we may have confirmation of the breakup. A popular message board is claiming that Jhene is already out of there.

Here is what is being reported elsewhere:

[Jhene Aiko] unfollowed [Big Sean] on Instagram yesterday, and everyone who noticed thought it wasn’t a big deal (but please keep in mind [that] she would constantly unfollow [ex-husband] Dot whenever he did something wrong etc.) she also liked a tweet yesterday that said something along the lines of “If you can not provide something someone is seeking, love them enough to leave room for someone who can show up.”

Well today she unfollowed a bunch of fan IG accounts that was dedicated to him or their relationship, she deleted a few IG photos, changed captions on certain pictures that involved them & she also changed her twenty88 header on Twitter to a picture that says “keep smiling”

The thing that makes this weird is that Sean is still liking photos/tweets of her. Now this is just my assumption but him doing that makes me believe that he’s either trying to get her attention or they left it on good terms but the best way for her to get through it is to erase him from her social media sort of speak either way something is up

Personally I was wishing them well but something felt “off” the moment I saw her falling for Sean imo a month ago is when I felt like Sean appeared to be bored/uninterested in my eyes like the excitement of it all fell off for him I also thought it was weird that he didn’t defend her against Dot/Cudi and given Sean’s sketchy behavior in his past relationships I don’t think he’s ready for anything serious he has a lot of growing up to do and he seems to can’t let go of the guilt he feels about how he treated Ashley
at 5:05 PM