Power Tussel in Kenya: Wizkid fights with another artiste at Chris Brown's concert 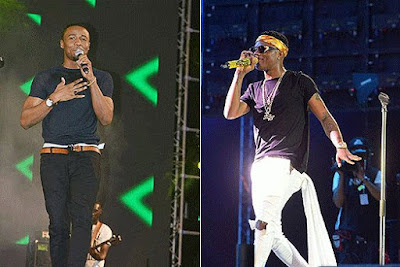 According to reports, Alikiba & Wizkid were the remaining curtain raisers at the concert but none of them was willing  to perform before the other.


As per the concert ads and announcements, Wizkid was the main curtain raiser and as such was expected to perform last before Chris Brown stepped on stage. This meant that all East African
Artistes including Alikiba had to perform before Wizkid.

However Alikiba and his team didn’t agree to this. Their reasoning was that while Wizkid was the bigger music brand across Africa, Alikiba was more popular in Kenya, particularly Mombasa thanks to his Swahili music.

The organizers found a hard time negotiating with these two stars, both nominated in MTV Europe Music Awards (MTV EMA ) 2016.

Before this time, a few months ago, when Diamond Platnumz came to Kenya to perform at the ODM 10-year anniversary, he was made to perform before Ali kiba, his bitter rival.

When he realised that he had been duped to curtain raise for his rival, he reportedly threw a tantrum and refused to exit the stage. It took the intervention of the organisers to convince him to leave the stage.

Now, during the Brown's concert the weekend past, organisers who were favouring Ali Kiba made sure that he would perform after Wiz Kid.

Kenyan media outfits report when Wizkid realized that he was being played to curtain raise for an artist who was beneath his level, he refused to perform.

The back-and-forth spat affected the concert by delaying the two artists' performances. Brown's appearance had to be pushed to past 11pm.

After all had been said and done, Wizkid performed before Ali Kiba.  Unfortunately, minutes into his second song, Kiba's microphone got disconnected.

He had to leave the stage to make way for Brown's 90-minute crowd smasher.

Later in the night after Brown had left the stage, the organisers brought Kiba back to the stage to finish his performance.