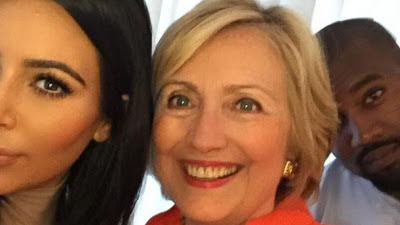 Hillary Clinton heaped praises on Kanye West for rushing to Kim Kardashian's side after she was robbed in Paris. Democratic Presidential nominee, Hilary Clinton told "Extra's" AJ Calloway on Wednesday:


"He was in the middle of the concert and he ran offstage, bless his heart,". "I'm just glad nobody was hurt."

Clinton said she felt "really bad" for Kim K, who was robbed of about $11 million worth of jewelry and held at gunpoint in her hotel room.

Kardashian endorsed Clinton late last month for Presidency.
at 10:56 AM