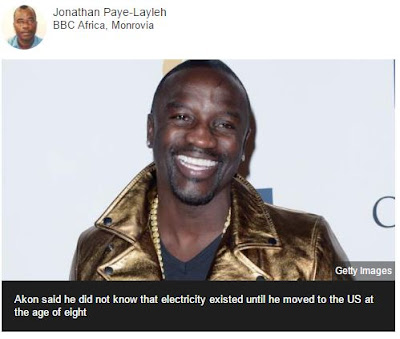 Senegalese-born hip-hop musician Akon is in Liberia to install solar electricity at two primary schools in the West African country.


It is part of his Lighting Africa project to bring electricity to 600 million people across the continent.

In this instance he has partnered up with Bridge International Academies, which, in association with other international organisations, is behind a pilot project in Liberia to run 50 government junior schools.

As his motorcade drove into the capital, Monrovia, under police escort, the musician said it was “crazy” that he could not see a single street light on the 50km (32-mile) road from the airport.

Akon told the BBC that he was moved by the resilience of the Liberian people after 14 years of civil war and the recent Ebola epidemic.

“A lot of people don’t realise that it’s the people that develop countries; all government does is to try to manage the process; and in Africa we have a tendency of thinking that the government does it all for us.”

“This is our country, we have to live in it, we have to sleep, we have wake up in the same environment, so we have to be the ones to create that environment for ourselves; and we can’t put it on government,” he said

The musician said Africans should look beyond race and address the continent’s education and other problems.

“It’s not a black or white problem; it is an African problem,” he said.

And he told school children in Liberia to take their learning seriously, saying:
“We all benefit if we are educated.”