Tyra Banks opens up about her feud with Naomi Campbell 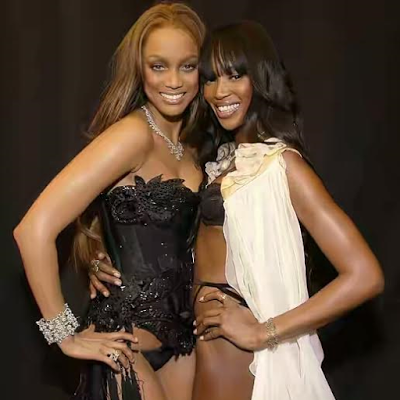 Tyra Banks who is worth an estimated $90million has disclosed how she carried on a running feud with fellow supermodel, Naomi Campbell. Tyra said Naomi was jealous because she was no longer going to be the undisputed top supermodel of colour.


Speaking to a Norwegian TV show she said:

"I got to Paris and it was very difficult. I did very well, very fast. But then the industry was saying, "Look out Naomi Campbell, here comes Tyra Banks. Naomi Campbell sit your butt down, this younger one is coming to take your place.'"

'It was really unfair to her because the other models that weren't black, like Kate Moss came up, we were the same generation, they weren't saying, 'Look out Christy Turlington, this cheek bone girl has cheekbones higher than yours! Get back!' You know, so they weren't saying that.

'So, you know, it wasn't fair to Naomi, but her response to this day was... I'm very scared of her. I don't want to go too deep into the past, but it was very difficult, very, very. Some of the lowest times of my life I'm dealing with that. I don't condone her actions and her response, but I understand where it comes from, because the world is saying "you're not gonna have your spot, we're gonna take your money, we're gonna take your fame, go sit down, there's somebody else."

'You know, so that's pretty serious. She reacted strongly, but I kind of understand where that was coming from inside of her."

The two queens of the catwalk  however put the past behind them when Naomi appeared on Tyra's defunct chat show and offered an apology. Speaking about the touching moment Tyra said: 'She kept saying it never happened and then there was a commercial break and then she came back and said, you know, "I'm sorry."

'And, oh my God, I just cried like a baby. To hear that after so many years of pain and dealing with it publicly... me having to leave agencies because of her... to hear that apology meant the world to me. She has no idea what that did for me.'

The super successful model also spoke about how her career almost grind to a halt when top designers stopped picking her because she put on weight.

She said:
'My agents in Italy gave (my mum) a list of designers that did not want to hire me anymore because my body was getting thicker.

'And she showed me this list of designers and I just started crying and said, 'Oh my gosh, Mommy, what do I do? Am I supposed to like starve myself? OK, maybe I won’t eat any bread anymore. Just salads with no dressing, salads for breakfast, lunch and dinner.'"
at 5:26 PM