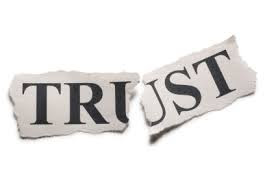 Lying in a marriage is often inevitable. Hopefully these tales can stay small and innocent, but if the lies your spouse is telling you are ruining your trust, you might actually be to blame.

Here are five ways you are contributing to the lies in your relationship:

1. You don't want to hear the truth
If you refuse to believe what your spouse (or anyone for that matter) tells you, it is hard for people to be honest with you. You may ask the same question over and over hoping the answer will change. Or you ignore what was said and continue to believe whatever you want. You may even force a false confession from them just to end the argument. It may just be easier for someone you love to lie to you than to know what they say doesn't make a difference.

2. You don't trust them
If you're a suspicious spouse, your partner may lie to try to avoid conflict. Even when they've done nothing wrong, your spouse may lie about where they were, who they were with or what they did just to avoid a fight. If this is the case, you likely accuse them of wrongdoing with no proof, or manufacture evidence of guilt from everyday occurrences. Your partner has learned that being honest with you doesn't do them any good.

3. You love to argue
Some people love to argue. But there are healthier ways to get the attention and excitement a good debate can bring. Starting arguments with your spouse to shake up the energy in your relationship can lead to some bad and dishonest habits.

4. You blow up
You can do some serious damage to your marriage if hearing the truth causes an unpleasant outburst. By overreacting, you're letting your spouse know you can't handle the truth. And it might be safer for them if you didn't have it. But then finding out you were lied to later on can cause the same problems. By making a scene, you're putting both you and your spouse in a lose-lose situation.

5. You don't pay attention to them
Sometimes lying isn't to avoid conflict. Sometimes it is a response to being ignored. Your spouse may create a fantasy world, lying about what happened that day, crises with her friends and family, or crazy situations that could only happen to them. They'll invite you to listen to their latest made up tale just to get some one-on-one attention. They lie to keep you engaged.

Don't make it easy for someone you love to lie to you. Make it easy for them to come to you with the truth. You shouldn't have to grill them, chase them or beg them to be honest with you. And when you hear the truth, don't make them wish they'd told a lie. Relationships should be a place where you and your parter can tell the truth and truly be yourselves.