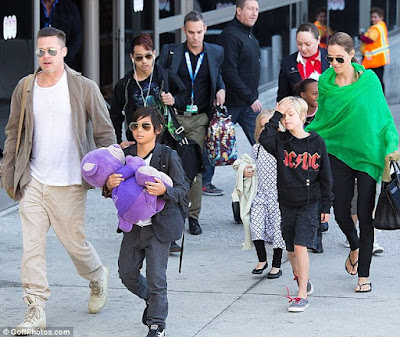 Brad Pitt has been cleared of abuse allegations by the L.A. County Dept. of Children and Family Services, TMZ has learned, and that gives him a huge advantage in his custody war with Angelina Jolie.


Law enforcement sources tell us DCFS concluded Wednesday it would close the investigation involving an incident in Sept. between Brad and Maddox on a private jet. The Dept. reached the decision ... Brad did NOT commit child abuse during an argument that ended with physical contact.

The case was exhaustively investigated. Social workers interviewed Brad, Angelina, the kids and witnesses on the plane. Everyone cooperated in the investigation. No further action will be taken.

The conclusion is a repudiation of sorts of allegations made by Angelina, who claimed Brad intentionally and without justification struck the boy. We're told she also had claimed there was a pattern of misconduct on Brad's part, something DCFS did not buy.

Now that Brad is cleared, he has a big advantage in the custody case. Angelina is asking for sole physical custody and Brad wants joint custody. California judges favor Brad's position.