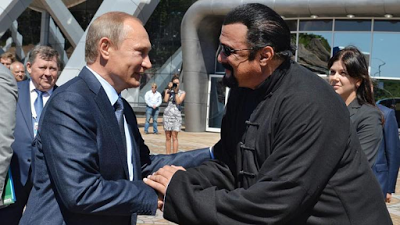 After several visit to World’s largest nation, American actor, Steven Seagal has been granted Russian citizenship by President Vladimir Putin. A wish he has been craving for years.

‘This was his desire, he had really applied. He had been really persistent for a long time and been asking to grant him citizenship, he is actually renowned for his quite warm feelings toward our country and he's also a well-known actor, which gave grounds to make him a Russian citizen.’

Meanwhile, it wasn’t a big for the actor to be made a citizen of Russia; the pair has been bromancing each other for quite a long time after they reportedly attended several martial-arts events together in Russia and visited an academy there in 2013. In 2015, the actor also attended the Victory Day parade held in Red Square to mark the 70th anniversary of Russia's victory over Nazi Germany.
at 9:16 AM