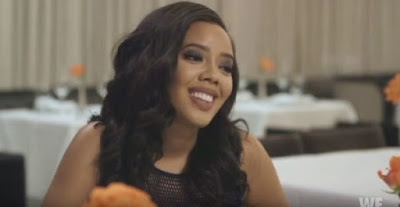 A couple of days ago when Angela Simmons revealed that she ended up getting pregnant the first time she had sex, a number of people on the internet called her out and stated that they didn’t believe here.

Some of her social media followers called her a hypocrite because she had publicly proclaimed for years that she was a virgin. As a result, Angela Simmons decided let people know that it was after meeting and falling in love with her fiance that she lost her virginity.

In a clip from “Growing Up Hip Hop”, she says “I’ve never been with a guy before Sutton, so they’re looking at me like, ‘How could you be pregnant?’ By what? Immaculate conception?’ No one’s understanding. People are concerned about me being a virgin. I’m not a virgin anymore, obviously, if I’m pregnant. I met the man that I want to be with forever and something happened. It didn’t happen the way I thought it would happen and that’s just what it is. What are the odds? First time, boom! You’re pregnant. Oh, okay. Great.”

Watch the clip below.


In an interview with the Breakfast Club in January she said, “Who’s gonna trap me? I’m not having sex until I get married so they’re not gonna get me pregnant. I’m really smart. So nobody’s trapping me.”

29-year old Angela Simmons welcomed a baby boy a couple of weeks ago after getting engaged to her then-mystery boyfriend, Sutton Tennyson.
at 9:58 AM