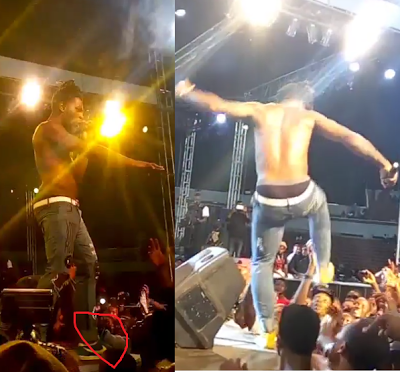 Burna Boy almost lost his cool on a fan after one of his Nike Air Max was taken away from him while performing at the Phyno’s concert on Sunday.

In one of the videos uploaded by HipTV, a fan was seen untying one of his shoes before it was later taken off.

While in the second video the same fan was seen making a close contact to allegedly take off Burna’s stockings which left him with no option but to attempt launching an attack until Phyno came in between the scene to calm him down before he continued his performance.

According to Instagram user, c_codenwafor, who must have attended the gig, he said Burna Boy freely untied the second shoe and gave it to boy after he successfully removed the first one but got agitated after someone attempted to make another move.

‘Those fans untied his shoes and took one , burna then freely pulled the remaining right side and toast over to the guy and continued his performance as if not happened. Later on, he got to the same spot and someone tried removing his stockings and that when he got angry.’

Watch the videos below…