Facebook pays $15 to users for using their images without permission

A group of Facebook users have received payouts from the social media giant, Facebook, for a class action lawsuit between Fraley vs Facebook on an account of the company using images belonging to people in ‘Sponsored Story ads’ without getting their permission first.


According to MailOnline, five plaintiffs claimed that the site used their image for 'Sponsored Story ads', which are created when members 'like' company pages or websites.

The suit also claimed that consent was not received by the parents of people under the age of 18, whose images were used by the giant company, for ads.

Facebook was then ordered to pay $20 million to all those who joined the suit as at May 2, 2013, when the case was been tried in court as part of settlement from the case which was filed in April 2011.

However, Facebook is said to have broken a Californian law which states that companies are forbidden from using the likeness of people in ads, without their consent. This was after in different occasion, Facebook was quoted to have vowed that its users would have more control over how their images would be used in ads, a promise which was violated when it used people’s ads without their permission.

Meanwhile, it took two years of deliberation on the lawsuit before a U.S. federal judge approved the $20 million settlement in August 2013. The case spent years in appeal court, which is why the payout took so long to reach customers. However, finally this year, all the appeals were settled, allowing payments to be released to the all plaintiffs involved.

On Monday, dozens of people posted on social media saying that they have all got $15 checks.

See some of the reactions to the payment below: 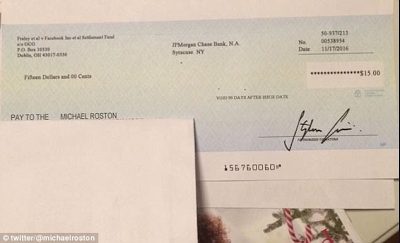 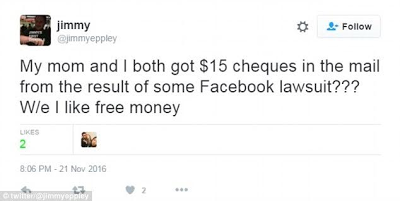