Floyd Mayweather and TI throw shades at each other online 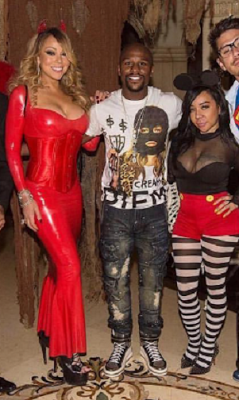 Rapper, TI posted a video of jokes being made by Kevin Hart while they were all at dinner, he only chose to post the part where Kevin Hart made fun of Floyd Mayweather's father.

Some of those at the dinner were Kevin Hart's wife, Eniko, Fabolos and others and they all laughed. However, TI's arch enemy, Floyd Mayweather didn't appreciate the video, so he posted a video of him dancing intimately with TI's wife, Tiny Harris, at Mariah Carey's Halloween party in October of this year.

Remember when the photo of Mariah, Tiny and Mayweather surfaced on the Internet and Tiny said Mariah Carey had 'forced' her to take a photo with Mayweather? Well from this dance video, that seems far from the truth. Watch T.I.'s and Mayweather's dance video below...

Video of Mayweather dancing with Tiny:

So after #TI posted him and his homies cracking jokes about #FloydMayweather's dad, this video of Floyd and Tiny dancing together at #MariahCarey's Halloween party suddenly hit the net. Remember when she said she was "forced" to take a pic with him by Mariah? Mmmhmmm
A video posted by TheYBF (@theybf_daily) on Nov 28, 2016 at 3:47pm PST

Video of Kevin Hart making fun of Floyd's dad posted by TI below: