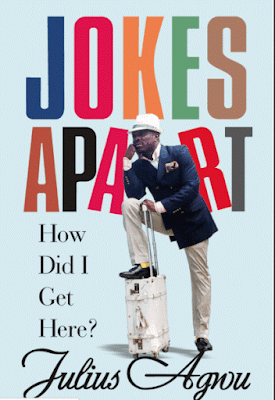 During the celebration of his 40th birthday in Lagos, Nigerian comedian, Julius Agwu unveiled his biography, a book titled ‘Jokes Apart: How Did I Get Here’.


The book is a detailed chronicle of his life, upbringing, and path to success as a Comedian and entrepreneur.

In the book, Julius Agwu writes, ‘My mother, Mary Welebor Agwu, gave birth to me on a quiet, rain drenched evening on Saturday April 7, 1973 at the University of Port Harcourt Teaching hospital and I was raised in a village called Choba. Choba is famous because it was the host community for Willbros, the oil services company that was very prominent in the James Ibori saga. She was glad to have me pop out having been in labour for hours, long hours during which she thought she would bleed to death; an experience she had never gone through despite having given birth to four children before me.’

‘I grew up as the son of a man who was a part-time bricklayer, part-time hunter, part-time okada rider and sometimes, part-time father. Now don’t get me wrong, my father, Augustine Wamadi Agwu, was not a bad father, he was just a very busy man. When you are a part-time bricklayer, you don’t wait for jobs to come to you; no way. You wake up every morning and look far into the horizon; where ever you see or smell work, you chase it down. And my father did that, chasing jobs as far away as Patani in what is now Delta state; he was also part of the crew that built Okrika grammar School. If you look inside the Michael West dictionary and check under the entry for hustler, you will see my father’s picture!’
at 12:56 PM