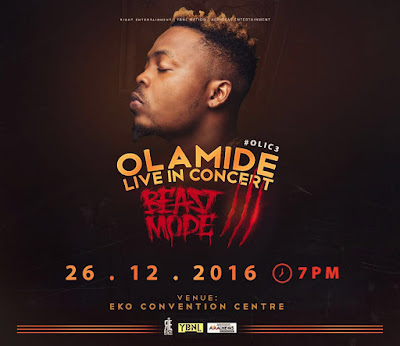 The rapper, who has been praised by critics for his consistency in the year 2016 revealed the night, will be one to remember as he is fully prepped to make the 2016 edition of the concert a lot bigger than its sophomore; which was held in December 2015.

Tagged ‘OLIC 3: Beast Mode III’, the concert will witness a one-of-a-kind performance as the rapper is set to take fans down memory; performing songs from the early stage of his career.

The show put together by Right Entertainment, Achievas Entertainment and YBNL will also have some of the biggest names in the music industry in attendance.

Speaking on his plans for this year’s ‘OLIC’, Olamide remarked, “I’m fully charged for the concert this year,  my battery is fully charged!”