5 Top Predictions Of The Music Industry For 2017 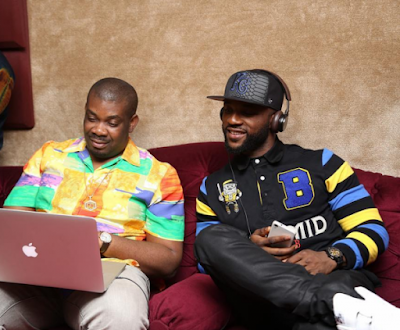 
Well, we are neither that prolific nor that divinely inspired. We only guessed five things are more likely to happen than not.

Here they are, in no particular order or rank:

Mr Eazi would pick a fight with Tekno.
Mr Eazi ain’t no killer, so you can push him. Since he won the highly coveted Next Rated category award at The Headies Mr Eazi has left industry watchers no doubt that he still hasn’t said his mind about Tekno, who got dropped from the nomination or flipped it off, depending on whose side you’re on. In tweet after tweet and instagram post after instagram post he had made it obvious that he would not shy away from the topic if anything or anybody cared to prod him about it. It would be interesting how this plays out next year between Mr Eazi and big cassava reputation Tekno, since they both share the same mini skirt and pointed breasts fan base.

Tiwa Savage and Teebillz would reunite, for their super cute son Jam Jam
A lot of people, including us – we must confess – have been praying silently that God should inject his ultimate will for marriage back into the lives of Tiwa Savage and her estranged husband,  Teebillz. People like us have been asking our heavenly father to do it, if not for the two hot tempered and yam head boo and bae, then for their super cutie son Jam Jam, who absolutely does not deserve to grow up between two separated parents. Well, never despise the power of prayer. We can now categorically say that that dream, which a few months back seemed so highly unlikely, is now looking more like it would happen definitely. All thanks and praises, raise your hands somebody. Come on now!

The Supreme Mavin Crew and Iyanya would explode our airwaves
Physics tells us that the heat lost by the fire equals the heat gained by the kettle, so no long story. This particular prediction is actually based on solid science. In Iyanya what Triple MG lost equals what the Mavin Crew gained. The result is going to be spectacular. We can’t wait!

2Baba would quit active music for family
2Baba, aka, Tuface Idibia, would quit active music to focus more on his family. Don’t ask us how we know. We know. It’s a prediction, remember. After following the trend of 2Baba’s music action and performance trail in 2016 the probability is strong that he may tone it down a little bit to cater more for his kids next year, even do school runs, why not. Queen Annie’s royal duties are in no way threatened. And to be frank 2Baba does not need to lift a finger again to earn anything anymore. Cool, isn’t it?

Harrysong would do a collabo song with 5 Star Music crew
We all know how fast and how peacefully Nigerian music entertainment beef dies. Just when you sit back and relax to watch them slaughter and murder each other off, like Biggie and Tupac did, they all line up, snap selfies and tell us that it is God. Olamide and Don jazzy did it so why not Harrysong and Emoney? Oluwa ni joo. We love it! Peace is better than war, after all. So watch out for Harrysong and the 5 Star Music crew collabo song in 2017. Kcee may even let Harrysong write the song, who cares. It’s beef they are squashing here, isn’t it!