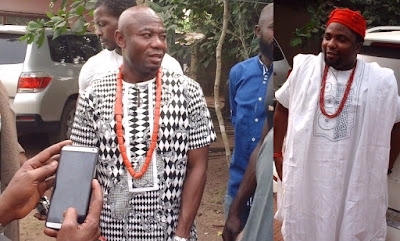 Former Nigeria international, Emmanuel Amuneke on Tuesday December 27 became a prophet recognised by his people as he was elevated into the royal class of traditional rulers by his Eziokele Community, Eziobodo in Owerri West Local Government Area of Imo State.


The former Nigeria left winger and Flying Eagles coach was installed as the Aka Welitere Mba1 (the hand that promotes the community) of Eziokele by the traditional ruler of the community, His Royal Highness, Eze Richard Ngozi Osuji.

Also honored was Emeka Amajiriaku, founder of ASJ Academy which produced the likes of Chidiebere Nwakali, Kelechi Nwakali and Chukwudi Agor that represented the country at the U-17 level.

Eze Ngozi Osuji said that the chieftaincy title conferred on Amuneke was in recognition of his leadership role in putting the name of the community in the national and global light and inspiring the youths of the area to continue from where his footballing career stopped.

"Our community could not have been heard and known outside this area if not through Amunek.

"Through his football career, Amuneke lifted the name of our community. He also ensured that other youths from this area followed suit and earned their living without resorting to vices," His Royal Highness, Eze Richard Ngozi Osuj said.
at 5:25 PM