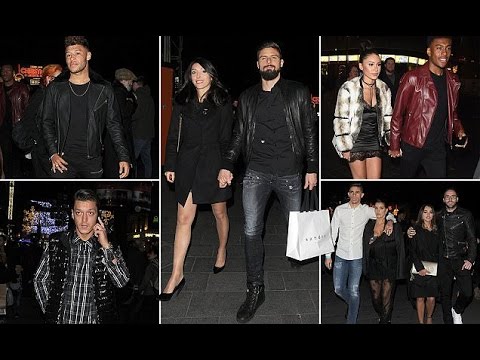 The stars of Arsenal did their best to forget about the events at Goodison Park as they enjoyed a night out in London on Wednesday night.


The players saw their 14-match undefeated run in the Premier League brought to an end when they squandered a lead to Everton on Tuesday.

And the majority of the squad, including Mesut Ozil, Alex Oxlade-Chamberlain and Olivier Giroud, attempted to put the result behind them as they attended a performance of La Soiree in Leicester Square.

The show, described as a 'theatrical phenomenon', features a mixture of cabaret, new burlesque, circus sideshow and contemporary variety.

Arsene Wenger's men, joined in most part by their wives and girlfriends, showed little sign that they were lingering on the defeat as they posed for photos on their way into the venue.

Alexis Sanchez, who was nowhere to be seen at the gathering, had opened the scoring in Liverpool with a deflected free-kick.
at 12:38 PM