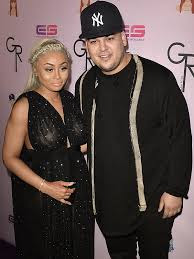 Heartbreaking. Rob Kardashian took to Snapchat on Saturday, December 17, to reveal that Blac Chyna had moved out and taken their daughter, Dream, with her along with the contents of the nursery.

The shocking move came shortly after Chyna, 28, revealed that her Instagram account had been hacked and several of her alleged direct messages were posted online. Some of the messages detailed her plans to trademark the Kardashian name after they married next July, others allegedly showed her referring to her fiancé as "fat" and "lazy," and claiming that she would give him a year and then end things with him.

Kardashian, 29, appeared to have been crying as he posted Snapchat videos showing Dream's empty nursery and the Christmas tree and decorations set up for his first holiday with his fiancée and only child.

"I've got the Christmas tree all set up for Chyna and the baby but they left me," he said in one of the videos.

"So I get home and Chyna took the baby, took the whole nursery we built," the Rob & Chyna star continued. "And Chyna took everything that we built for the nursery for the baby Dream and she left, and she just left me alone and took the baby."

He revealed that she also took all the furnishings from the room that they'd decorated for King, her son with ex Tyga.

"I'm pretty upset and I'm pretty sad because it's about to be Christmas and I want to be with my baby," Kardashian added.

He showed the home decorated with Christmas lights, a tree and the gingerbread house with all of their names on it.

I don't mean to keep talking about all this but it's making me really sad," he added. "So yeah I am not feeling so good and it's [inaudible].

Rob subsequently posted a message on Instagram, writing, "Sorry to be so open but I'm not feeling so good after seeing @blacchyna messages about me and what her plans were. I have never been this heartbroken in my life. I don't mind being so open or if anyone thinks I'm being weak but I don't play when it comes to Family and Chyna was my Family and thought we were getting married. I treated her as a Queen."

"My baby girl is 1 month old and Chyna took her and left this beautiful home that I just bought for us. Right before Christmas. Someone I have given my all too," he continued. "I Loved every inch of that woman and loved everything that came with her. I truly loved Angela. I gave everything I owned for her. Didn't know I was just part of her plan. I really believed she was in love with me the way that I was with her and I am so hurt and never felt this before. It's different when you have a kid with someone. And after reading Chyna's messages to her best friend she was going to drop me after a year. She didn't even make it to that. I am so broken. This is a woman I fought my entire family for. I was in love with this woman to the fullest and I was none of that to her."

"I'M DONE ! This entire year I have done nothing but help Rob! It's so SAD & PATHETIC how low he'd stoop to cover up HIS PERSONAL ISSUES! Rob is mentally ill & refuses to seek help! He self medicates which makes it worse. I have done nothing but help & loved him from the beginning!" she wrote. "It's Chy here I got my own!!! I was doing swell before I got with him! I got him out of khloe's house, helped him lose all that f--king weight for him to do nothing & gain it all back! Rob asked for all of this! Rob begged me to have Dream! He stressed me out my ENTIRE PREGNANCY!!! Accusing me of cheating, going crazy on me with massive text blast daily! being an absolute lunatic & then cover it up with gifts! I was verbally abused every other day. I was still there with nothing but high hopes for us!"

She claimed that after they moved into his sister Kylie Jenner's house earlier this month, Kardashian started "calling me all types of bitches & hoes! AND I NEVER NOT ONCE CHEATED ON ROB! EVER! I gave him the passcode to my phone I have nothing to hide."

"He refuses to do anything!" she continued. "Eat healthy, work out, work, anything positive, he does nothing!"

Chyna then went on to claim that the messages leaked on Instagram on Saturday were old and she seemingly blamed Kardashian for the hack. "He only did this because when he went through my phone he couldn't find anything to be mad about! He's on snapchat acting hurt but he's yet to come see Dream yet! He knows where we are!"

"Honestly it's only so much a person can take," she added. "Everyone has tried to help Rob. I've gone beyond to help & so has his family! He's been diagnosed and clinically depressed for 4yrs. I'm done with the situation until he gets help. I have no longer have time to feed into Robert's shenanigans I have 2 children & myself to fend for. What hurts the most is watching him do this to me knowing my last situation and promising to never put me through it. Especially after our child is only 1 month. I hope he gets the medical help he needs. If you have ever dealt with a bipolar/depressed person you unders[tand]."

Shortly after posting her message, Chyna deleted it and the rest of the posts on her new account.

Watch the video below