Bobrisky accused of scamming a client 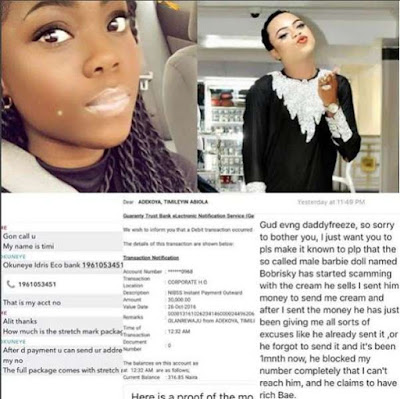 Bobrisky has once again, found himself in the thick of a controversy, but then again, he is a controversy in himself.


A young lady has come out to accuse the bleaching specialist of scamming her of N30,000 which is almost hard to believe knowing how much Bobrisky enjoys showing off his wealth.

The lady identified as Timileyin Abiola contacted CoolFm OAP, Daddy Freeze, via Instagram, claiming to have ordered bleaching cream from Bobrisky who has failed to deliver.

She wrote, "Gud evng daddyfreeze, so sorry to bother you, I just want you to pls make it known to plp that the so-called male barbie doll named Bobrisky has started scamming with the cream he sells I sent him money to send me cream and after I sent the money he has just been giving me all sorts of excuses like he already sent it ,or he forgot to send it and it's been 1mnth now, he blocked my number completely that I can't reach him, and he claims to have a rich Bae."

Freeze also shared photo proof of the transaction, showing that the sum was paid into Bobrisky's account in October.

Abiola claimed that Bobrisky has been giving different excuses as to why the cream is yet to be delivered and has now blocked her number so she is unable to reach him.

Freeze shared a photo collage of Abiola and Bobrisky, as well as the proof of payment, writing, "Lady claims Bobrisky collected money from her for some products but refused to deliver! I'm sure there is a mix up somewhere and Bobrisky would deliver. Here is her email anyway."


Bobrisky is yet to respond to the claims. Meanwhile, this is the second controversy the Transvestite has been embroiled in recently.
at 10:01 AM