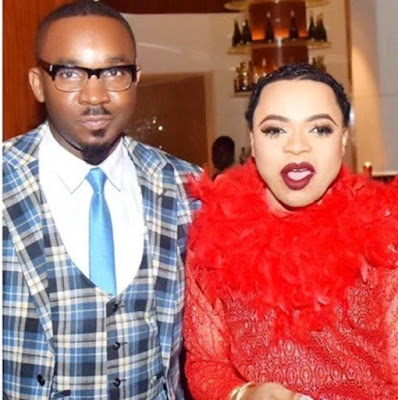 Pretty Mike a few days ago was accused of being Bobrisky's bae after the cross dresser shared a picture of himself and his alleged bae who everyone assumed to be Pretty Mike.


Pretty Mike has however come out to debunk the rumours on the grounds that he is a serial womaniser, thus cannot be Bobrisky’s “bae”. He also admonished everyone to “stop judging Bobrisky because of his looks and sexuality”. 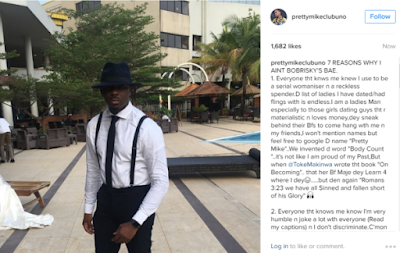 7 REASONS WHY I AINT BOBRISKY’S BAE.
1. Everyone tht knws me knew I use to be a serial womaniser n a reckless spender.D list of ladies I have dated/had flings with is endless.I am a ladies Man especially to those girls dating guys tht r materialistic n loves money,dey sneak behind their Bfs to come hang wth me n my friends,I won’t mention names but feel free to google D name “Pretty Mike”..We invented d word “Body Count “..it’s not like I am proud of my Past,But when @TokeMakinwa wrote tht book “On Becoming”.. that her Bf Maje dey Learn 4 where I dey😂…..but den again “Romans 3:23 we have all Sinned and fallen short of his Glory” 🙏

2. Everyone tht knows me know I’m very humble n joke a lot wth everyone (Read my captions) n I don’t discriminate.C’mon I’m in d nite club business n it’s part of my job to make friends n mingle.I never judge people n D fact tht lots of peeps have a problem wth @bobrisky222 sexuality doesn’t mean I should too.He’s a human being n God created him so who r we to judge God’s creation? so he invited me 4 his b/day prty n I graced his occasion as I would hve done 4 any Friend.

3. Check d interior of d car in d pic circulating online n compare it to d interior of my car n U”ll notice it’s not d same.Besides friends who were wth me on d day d snap ws recorded would testify I wasn’t wearing a blue jeans on tht day.

4. My club is currently under a MakeOver 4 a while now so where could I possibly be getting all dose cash she has been flashing since d beginning of d year?Btw, people don’t spend new naira notes at d club,so except I own a mint producing company (which I don’t),I wouldn’t hve access to New notes daily.

5. How could y’ll (especially all u amateur blogs)post such a story just cause some idiot said it? I expect y’all to make ur findings n support it wth concrete evidence instead of rushing to post such a senseless story.This is why I still feel@Instablog9ja is d best,dey don’t post ridiculous stories without proof,and I read sme of d comments,especially d ladies looking at my picture n saying “what a waste of fine boy” well u were all right, I’m a waste, my Cassava has retired cause I’m in a serious relationship now.

6. D picture of me lying in d bathtub ws taken by a girl n If u go to her page u”ll notice she also posted an hotel pic of herself.I would hve loved to tag her but I don’t want to create drama 4 her.But those who know her should go to her page n see 4 urself.

7. I think it’s high time we all stop judging Bobrisky cause of his looks n sexuality.I see lots of hateful comments whenever d dude is mentioned.Not fair at all.If u have d fear of God in u, you shouldn’t hate what He created no matter how he chooses to live his/her life rather let’s Pray 4 dem #Pray4BobRisky Instead of sitting in our homes/Offices n hate on another human being. Not fair at all.We should all learn to live as one n d fact that u don’t like someone else’s action doesn’t make ur own life perfect. Let’s spread love in 2017 please. “Turn down hate to turn up Love”! Enough said 🙏
at 10:20 AM