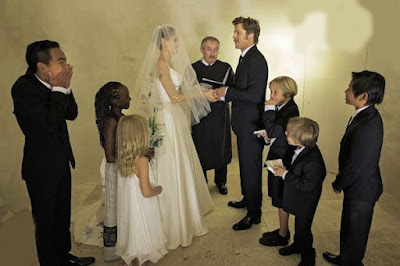 Sources connected to the case tell TMZ ... Brad filed docs Tuesday in family court, requesting an emergency hearing. We're told he intends to ask the judge to seal all documents and proceedings related to his and Angelina's ongoing battle for custody of their 6 kids.


Several sources say Angelina filed the documents because she feared Brad was angling to change their temporary agreement so that he could have unmonitored visits with the children. We're told

Angelina is relying on the family therapist, who says it's too early for Brad to have unmonitored visits -- but she does want him to have solo visits ... once the therapist signs off.

Sources connected with Brad, however, are calling BS ... saying the only document filed in the case is the one Angelina blasted out to the world ... exposing their 6 children to needless pain. Our Brad sources say there was no reason for Angelina to file a private agreement, and make it public other than to trash Brad and make the children collateral damage.

We're told he has made NO move to change the private agreement that was always meant to remain private -- and he feels by gratuitously making it public the way Jolie did ... it's evidence she's a bad parent.

Brad will get his shot within a few hours to argue the case should remain private. We're told the emergency hearing is slated for Wednesday morning.