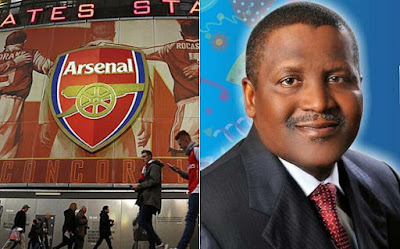 Chairman of Dangote Group of Company, Aliko Dangote has said he wants to buy Arsenal Football Club within “three to four years”.


Dangote, who is Africa’s richest man, is a lifelong Arsenal supporter and is reportedly worth $10.9million.

The 59-year-old businessman has often spoken about his desire to acquire the Premier League club , but it seems he now has a plan.

“Maybe three to four years,” he told Bloomberg Television when asked when he intends to buy the club.

“The issue is that we have more challenging headwinds. I need to get those out of the way first and start having tailwinds. Then I’ll focus on this.”

Dangote pointed out his success in business, as proof that he is the right man to transform Arsenal’s fortunes.

“It’s not about buying Arsenal and just continuing with business as usual,” he said.

“It’s about buying Arsenal and turning it around.