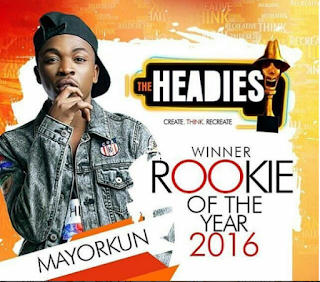 
The Headies secretariat today announced Mayorkun widely known for his club banger “Eleko”as the winner of 2016 “Rookie of the year'” award.

Dice Ailes, Dremo, Terry Apala and Mz kiss were part of the nominees.

After all the entries and votes from the public had been counted, it was brought to our attention that Mayorkun got the highest vote and emerged as the winner followed closely by his label mate Dremo and coming in third place was Chocolate City act Dice Ailes,

“The reason why the winner of this category wasn’t announced during the live show was because majority of the nominees were late for their opening performances and the show had to go on,” The Headies said in a statement on Thursday.
at 10:11 PM