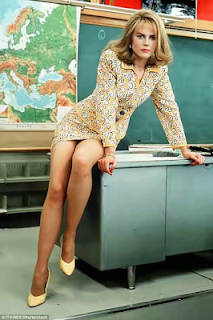 Nicole Kidman, 49, is one of Hollywood's most established stars but all the fame and money could not have been if she didn't have the courage to go after a job that seemed certain to elude her.


Appearing in a video for Variety's Actors On Actors series, she admitted that she fought hard for her role in the 1995 movie To Die For, after she discovered she wasn't the director's first pick.

'To Die For came along, But no one thought I could do it and I think the studio didn't want me and it sort of went through another bunch of actors,' she explained. She boldly gave the film's director Gus Van Sant a call to beg for the role. 'I said: 'Please, give me the chance! I beg you,'' Nicole explained, adding: 'Because the writing was so strong. Buck Henry.... I mean, come on. Talk about great writing.'

Her role as Suzanne Stone landed her first Golden Globe Award for Best Actress and set her on the road to Hollywood stardom. Moral of the story, pursue your dreams even if it looks like you've been written out of the plot
at 11:54 AM