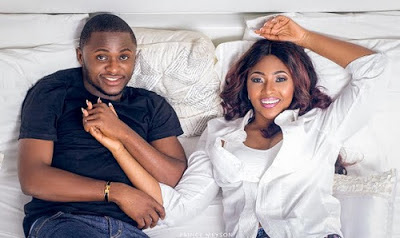 A journalist, Chris Ayo Joseph in an open letter to Ubi Franklin and his estranged wife has said the couple lacked love especially on Lilian’s side. Read what he wrote after the cut

Because If you respect your partner and the alter where the name of the Almighty God is called, you can't come and make promises to mere humans and forget about it all; most especially now that a little child is a product of your matrimony.
________________________________
Like I'll always say, marriage takes both people being willing to work through the issues. A marriage only works if you're willing to work for the marriage and as well putting God first because God is Love.
So Lillian, please permit me to say this with all due respect.. "Your marriage wasn't based on love my dear" and i honestly think you both don't love yourself that much.
________________________________
Because if you do, prior to your wedding I'm very sure there are behaviours that are evident if you have taken enough time to get to know your husband. Certain attitudes and habits of his should not be a surprise, because when you made those commitment to your husband, you were committing to his whole being. It's rare that people turn into a new person after marriage.
_______________________________
So if your husband has something that bugs you, more than likely it bugged you prior to jumping the broom, now is the time you must deal with it. If it's really wearing you down, communicate how much it is affecting your relationship with him and see there is a compromise between you both. Accepting defeat or divorce is a no no at this point for you both, and as you know love heals all wounds.
_____________________________________
On a final note, i think it's high time you both take a break from posting your family issues on social media and take the time to pray for divine direction from God, that's what true Christians should do. Allow the will of God be done. It's my prayer that God heals you both fast. Can't wait to see you both hold hands together again at public events. Stay Blessed!
#Myopinion #itsNotOver #itCantBeOver #ISayNoToDivorce"
at 4:06 PM