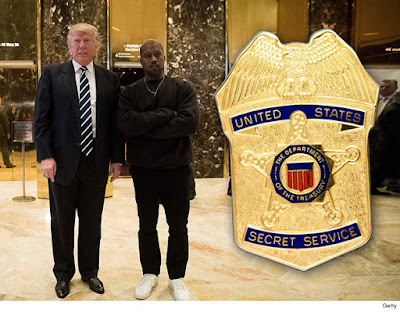 Kanye West, fresh off an involuntary psychiatric hold, was still able to get security clearance to see Prez-elect Donald Trump, because the Secret Service doesn't consider the rapper a threat.


A Secret Service official tells TMZ, "Personal problems that Mr. West is working through does not establish him as a security threat to President-elect Trump."

Donald Trump and Kanye West were all Kumbaya as they walked out of the elevator of Trump tower after meeting Tuesday for 15 minutes.

The President-elect told reporters he and Kanye go way back and the mutual admiration was apparent.
As we reported, Kanye asked for the meeting and Trump said, "Why not?" Kanye's creative director was present along with a Kanye camera crew. The creative director, Eli Linnetz, produced Kanye's "Fade" and "Famous" music videos. He's also there with Corey Gamble.